The City of Gold

We landed as the sun was going down over the desert. Out of nowhere sprung the skyline of the most luxurious city I’ve ever been to: Dubai.

After the 14 hour flight from DC, Jonathan and I were exhausted. We cleared customs and immigration without major incident and headed out to meet our car. The Shangri-La driver greeted us with cool towels and bottled water which was a welcomed refreshment. We hadn’t even left the airport and already Jonathan and I felt like royalty! Upon our arrival at the Shangri-La, we were met with breathtaking views of the Burj Khalifa. For a second I forgot that this was a business trip!

After we checked into our hotel we decided to grab dinner and a drink at the hotel. The iCandy Lounge was super posh. Emirati men and women sat on pristine white couches smoking hookah and drinking exotic juice concoctions. 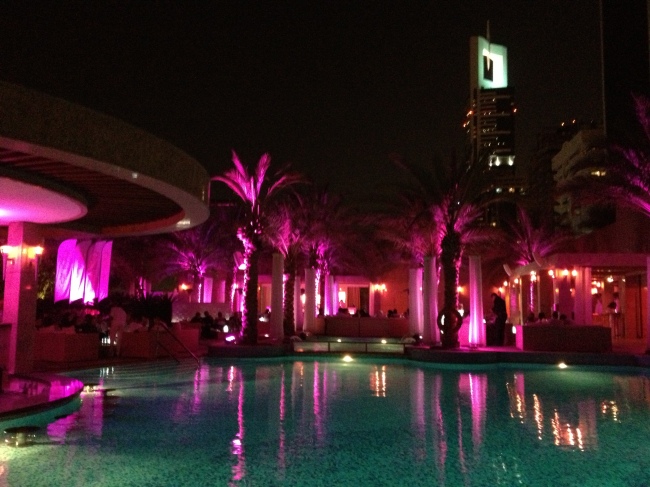 On the other side of the pool stood the Burj Khalifa, proud and tall.

The next morning was set-up day at the 2013 Gulfood trade show. Gulfood is a huge food and beverage show; exhibitors come from all over the world in hopes of connecting with key buyers in the United Arab Emirates and Middle Eastern markets. The organization I work for hosted 13 exhibitors from the southern United States. Since I was relatively new to the organization at the time, my boss wanted me to gain experience working a major international trade show. First was the market briefing to orient everyone on the business climate in the UAE and GCC countries. My colleagues and I then met up with all of our exhibitors, helped them set up their booths, set up our own booth, and made sure everything was in order for the next day. Since it was a short day of work, we met back up with Jonathan for lunch at a hole in the wall Pakistani restaurant. Out of all the meals we ate on the trip, this was the least “fancy” but the most delicious. We ate family style and tried a variety of different spicy foods. I regret not getting a picture of everything!

After lunch, Jonathan and I parted ways with my colleagues and headed over to the Dubai mall to check out the Burj Khalifa up close as well as check out the maze that is the world’s largest mall.Saying the mall was gigantic does not even begin to explain it. For example, there was an aquarium right in the middle of everything!

The mall was just floor after floor of designer retailers and restaurants. I didn’t want to go in any of the stores because I was afraid I’d spend all of our money!! Just outside of the mall is a beautiful fountain under the Burj Khalifa. It is picturesque and felt like an oasis in the middle of the bustling city. 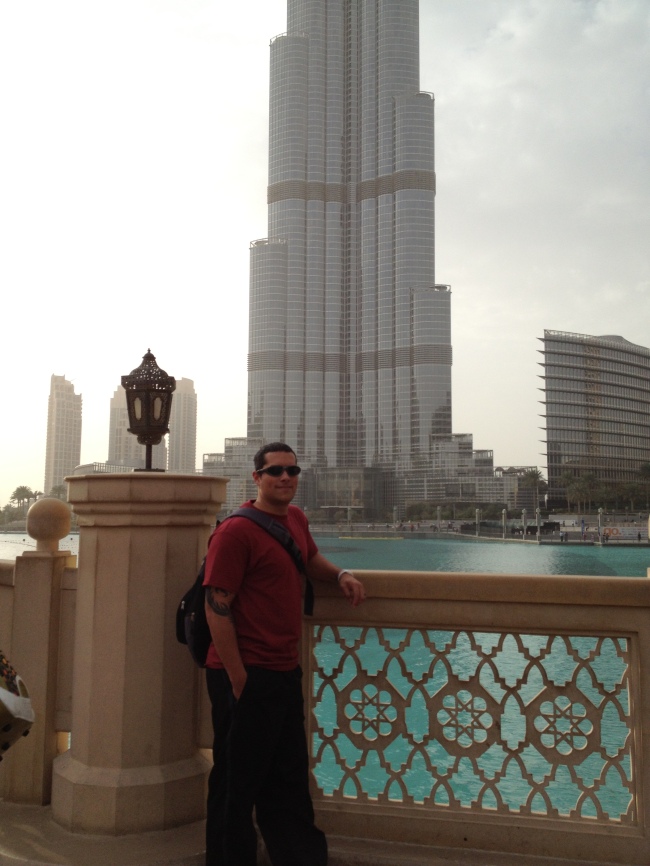 The dancing fountains were an amazing display of water and lights and music. We watched it a few times over the course of our trip and all of the variations we saw were exotic and impressive.

Since most of my remaining time would be spent at the trade show, we decided to do a night time bus tour of the city to see all of the main sights lit up and glittering against the night sky. 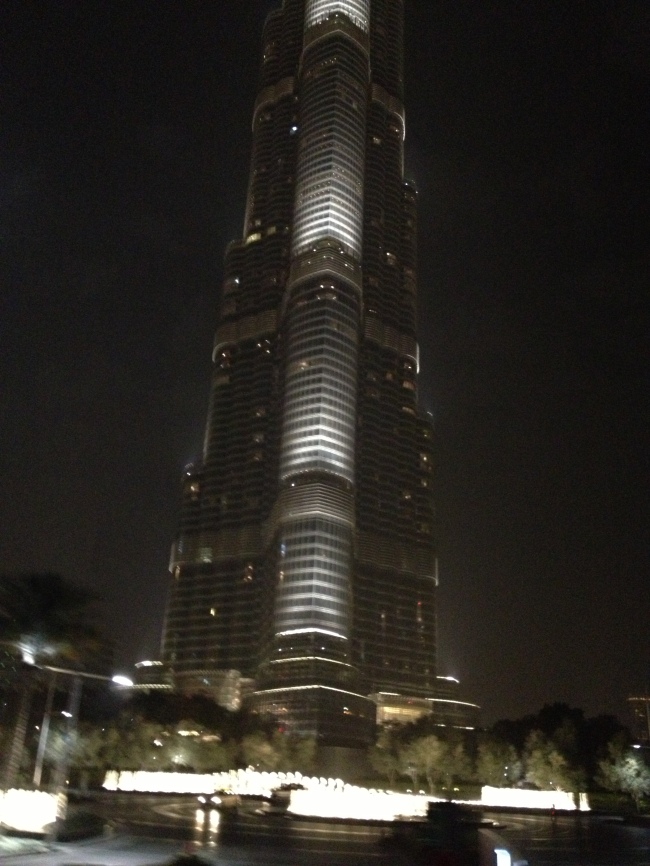 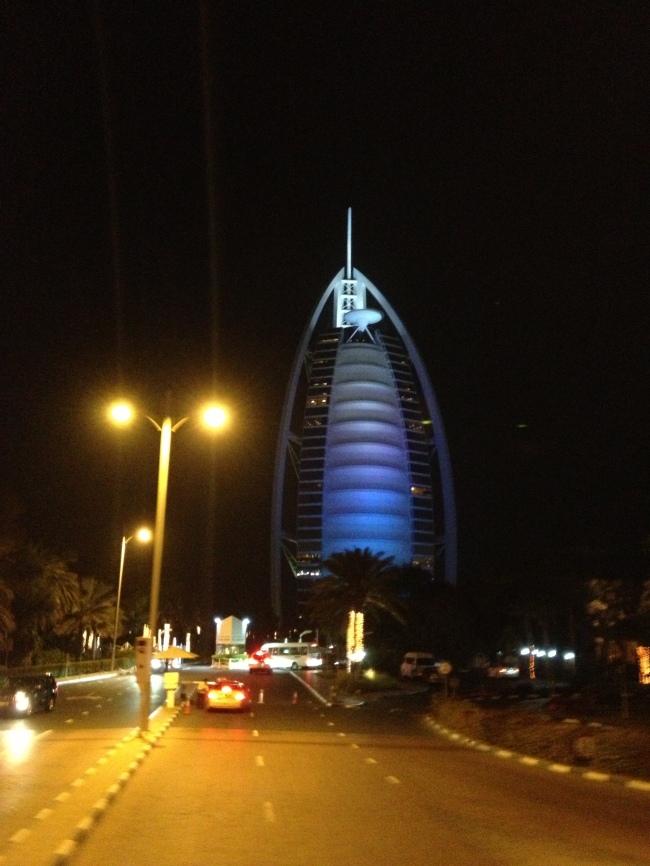 It was spectacular! Most impressive of all was getting to see Dubai’s very first skyscraper.

This bad boy was built in the late 70s/early 80s. It was awe inspiring to think that this city basically sprung from the dust and is not that much older than me! Embarrassingly enough, Jonathan was very jet lagged and fell asleep during most of the bus tour. We headed back to the hotel and went straight to bed.

The next day was the opening of the Gulfood trade show. Jonathan headed off on his own adventures while taxi’d over to the exhibition center. Our booth spaces were in a prime location at the entrance of the USA Pavilion that got a lot of traffic.The ribbon was cut right outside of our booth! 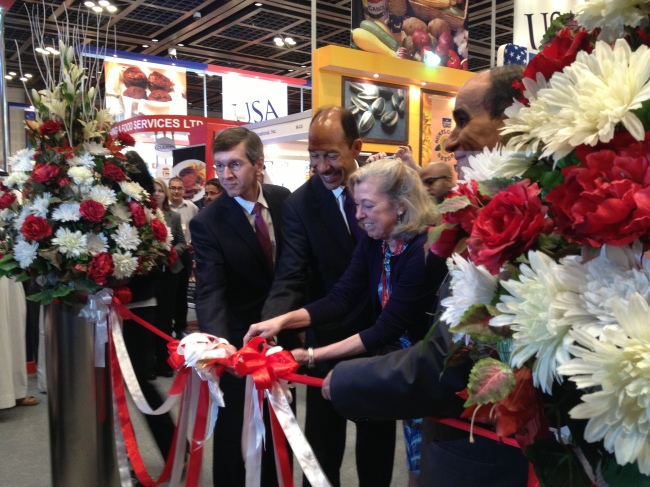 It was an extremely busy but productive day. I learned a lot about the companies we assist as well as how business is conducted at the show. Unlike at most other trade shows, the buyers that attend Gulfood are ready to write orders on the spot. Pricing sheets were out and business was in full swing. For a quick break, I headed up to the USA Pavilion lounge to take a look at the action from above.

It was an exhausting day for both Jonathan and I so we opted to eat in our room and go to bed early.

The next night, after the show the Agricultural Trade Office hosted a USA Pavilion reception at the Dusit Thani hotel. Jonathan met up with my colleagues and I to hear the Ambassador speak and mingle with other exhibitors.

On Day 4 I was able to leave the trade show early enough to do some exploring with Jonathan. 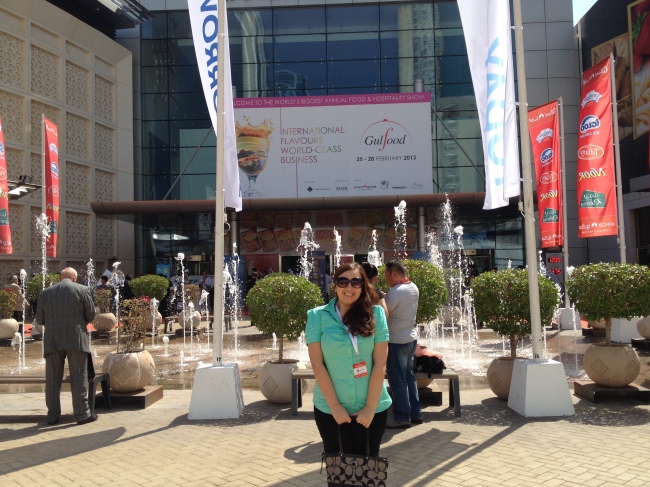 He met me at the exhibition center and we headed into the city. We wanted to maximize what we could see and do in such a short amount of time and so we decided to use the hop on and hop off bus. First we headed over to the Dubai Creek for a river cruise. 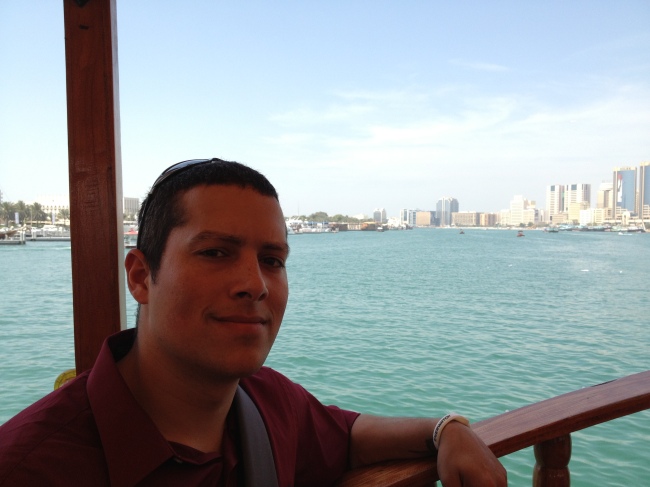 It was great to hear the history the Creek and how it was widened and dredged to facilitate trade. Next stop was the gold souk. People were harassing us to by jewelry and purses so we did not stay long.

After a quick bite to eat, we took the long ride over to the beach area. The Souk Madinat Jumeirah and hotel were such a beautiful area. There were great views of the Burj Al Arab and the little canals winding through the property were reminiscent of Venice. 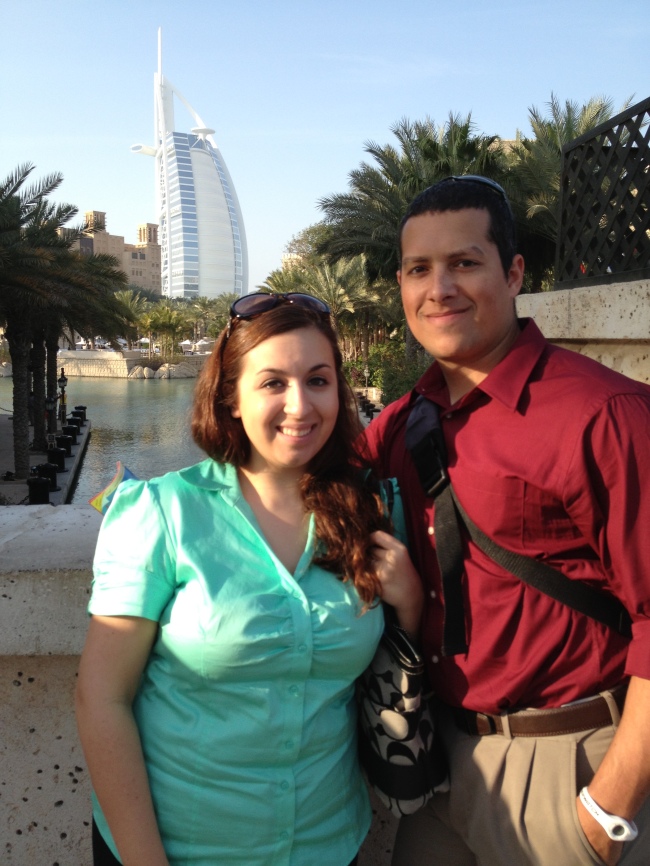 We did some souvenir shopping and then decided to have drinks and watch the sun set in one of the bars next to the pool and beach area.

It’s amazing how expensive everything was. I think we spent over $100 just on appetizers and a two drinks. After some more wandering around the area we hopped back on the bus and headed back to the Dubai mall area. We had scheduled an appointment to go up to the top of the Burj Khalifa, the tallest building in the world. Needless to say, it was a little nerve-wracking going up that high… 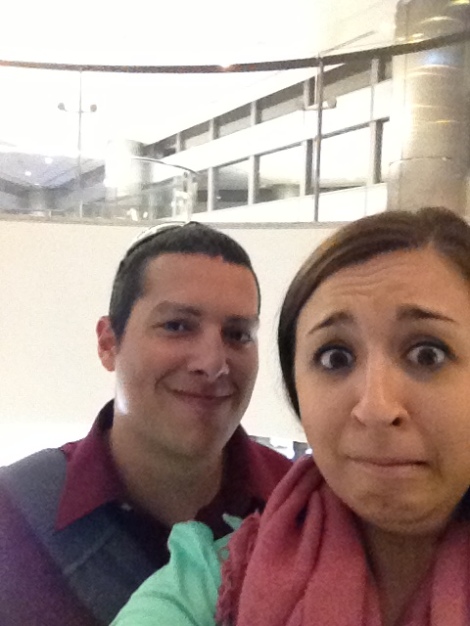 The views were so worth it! My pictures do not do it justice.

I felt like I was on top of the world!

The next day was our last and we had to head to the airport soon after the trade show. The show was busy and very productive so I was excited to head back and tell my boss everything I learned. I was so thankful that Jonathan was able to tag along so that we could experience this amazing city together.

We packed up our suitcases, filled to the brim with souvenirs, and thought about everything we had done. Looking out of our hotel window, the trip ended as it began – with a sunset over the city of Dubai.